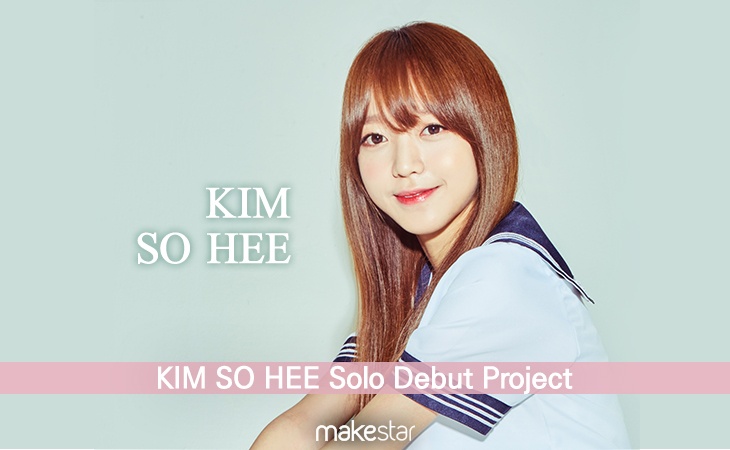 The adorable, lovely and all-rounded Kim So Hee, be a part of her solo debut project!

US$28,462.98460%
Funding GoalUS$6,183.75
This is an "All or Nothing" project that will be rewarded to project participants when 100% of the project is achieved.
If it is not reached 100%, the participating amount will be refunded and also you won't get any reward.
Project statusDelivery Completed another step towards her dream!

She finally comes back as a SOLO ARTIST! "I want to be that one who has a long career.
Not a celebrity you only meet once,
but an artist who stays in the minds of the people for a long long time."

Celebrate her awaited solo debut with Kim So Hee,

Starmakers who select SET2 and above

will receive the autographed Kim So Hee's solo album with your reward name.

Starmakers who select SET4 and above

will receive the autographed Kim So Hee's solo album with your reward name AND her autographed poster (not personalized).

She who brings you joy just by her presence~

Have a friendly talk with her during teatime

Get her autograph during the mini signing event

Remember all these beautiful memories during group phototime!

*Special reward is expected to be held in November ~ December.
Further details will be notified through following announcement(s).

Ways to help the Kim So Hee Project succeed!

Your help in promoting this project will go a long way to success!
Click on the social media SHARE button, and give Kim So Hee a helping hand!

*The Special Reward (Fan-Meeting) is expected to be held in November ~ December. Any further details will be notified in following announcement(s).