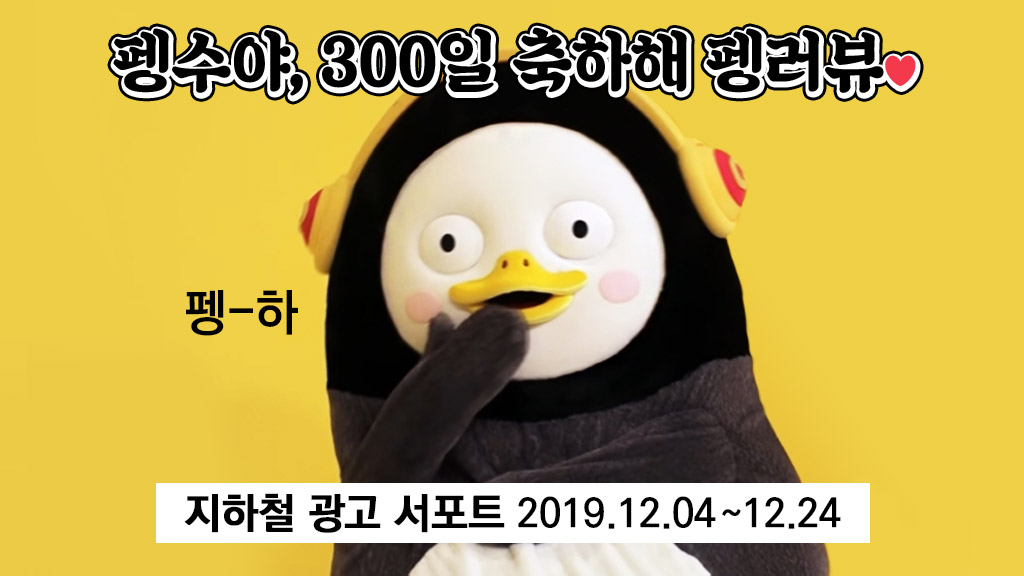 US$4,195.40100%
Funding GoalUS$4,184.10
This is an "All or Nothing" project that will be rewarded to project participants when 100% of the project is achieved.
Project statusEnd Project Participation

Thanks to a lot of your support~!

From Dec. 30 (Mon) 2019, the PENGSOO advertisement will be on center aisle to the waiting room at Samsung Station (Line 2) for a month!

All PengClubs! Please come, take pictures and leave the post-it notes there. ^^

So happy to celebrate the 300th day anniversary of PENGSOO's debut with so many people!!
Hope this news reaches PENGSOO. ^^

Giant PengTV already has 1 million subscribers -
it is safe to say that PENGSOO is loved by almost everyone!

January would mark Giant PengTV's 300th anniversary,
so I thought it would be a great idea to gather fans from Peng Club like me...

and prepare a small gift for PENGSOO.

- Before the Open Funding began on MAKESTAR, we have contacted a representative from EBS and have been permitted for promotional use of the image.

- 100% of the support funds gathered for Pengsu's Metro Ad will be used to put up the ad in the subway station and sponsor Greenpeace. Any part of the funds will not be forwarded to us, and EBS & MAKESTAR promised to raise the money in full transparency and never use it commercially.

Then now,
(for those of you who don't know PENGSOO)
here's a short intro for PENGSOO! I made the ad image myself!

Let's create an unforgettable moment for PENGSOO!
You know, PENGSOO might even pay a visit to the ad :)

I would love to place an ad at the mecca of idol fan club's ads at ★Samsung Station line 2!!★ for a month starting from the end of December - and I would like to invite all fans at Peng Club to join me to do something meaningful for PENGSOO!

Oh! And in case of when there are many participants and we receive more support than we need to have the ad running, the rest of the amount will be forwarded to currently campaigning for "Protect the Oceans", under the name <PENGSOO and Peng Club>!

※ Participation certificate will be sent via email

Hope the funding is successful and we can take pictures in front of the ad... :)

Images used on the project: credits to Giant PengTV